The talent, passion and drive of Auckland’s creative entrepreneurs were recognised and celebrated at the ART Venture Awards.

Two types of Awards were given: 14 people (2015) were a awarded a place, worth up to $35,000, on the prestigious year-long creative enterprise accelerator programme ART Venture.

Awarded was the prestigious Hynds Creative Entrepreneur 2015 Award which recognised the outstanding work of a influential changemaker working in Auckland’s, and New Zealand’s arts and creative sectors.

Sarah is an educator and founder of Ngā Rangatahi Toa, an award-winning arts mentoring organisation focused on empowering youth who have been excluded from mainstream education. Ngā Rangatahi Toa programmes match young people with top creative professionals working in the fields of performance, visual arts and music, to realise the creative and leadership potential of young people.

Sarah has almost 15 years’ experience in education, youth work, facilitation and creative arts. She has worked as a secondary school teacher in Hastings and Christchurch, in South Auckland residential youth justice, and as the pedagogical leader of alternative education in South Auckland. Throughout her time in South Auckland Sarah also worked as sector advisor for the Ministry of Education, advocating for increased access to the arts within alternative education and an acknowledgement of the arts as a credible pathway for young people. Working within New Zealand’s alternative education sector, Sarah saw a need for more support and programming aimed towards young people outside the mainstream education system. She went about researching, planning and networking within Auckland’s creative arts community to develop Ngā Rangatahi Toa and address this important issue.

Inspiration for the Ngā Rangatahi Toa program was based on youth programs run in New York, including DreamYard and the 52nd Street Project, which put theatre professionals and young people together to produce a new creative work. In 2010 Sarah won a US State Department, US International Visitors Council International Professional Development Award (Creative Arts / Marginalised Youth) and went to New York, Philadelphia, Chicago and Los Angeles in 2010 and 2011 looking at alternative education models, with a specific focus on the transformative power of the arts. In 2012 Sarah won an Arts Access Aotearoa National Community Partnership Award for Ngā Rangatahi Toa Creative Arts Initiative, and in 2013 she was awarded a Vodafone World of Difference Scholarship. The scholarship allowed Sarah to undertake a month long research of youth mentoring programs in New York in 2013. Sarah returned again to the US for three months in 2014, undertaking professional development and working with Ngā Rangatahi Toa partner organisations in New York and Baltimore. This year Sarah was named the New Zealand International Woman of Courage, a US State Department award made by the US Embassy in Wellington, for her work with marginalised youth.

Sarah is a passionate educator and entrepreneur and a strong advocate for marginalised youth in New Zealand, with particular experience and success working within Auckland communities. In setting up the Ngā Rangatahi Toa programme she has shown extraordinary determination and leadership, drawing on her knowledge and experience of New Zealand’s education system, and her research of successful mentoring models internationally, Sarah was able to create a unique creative arts and mentoring program in this part of the world.

The Hynds Creative Entrepreneur 2016 Award goes to founder and editor of The Spinoff, publisher, writer and critic Duncan Greive.

Duncan is an Auckland-based journalist, critic and editor of The Spinoff, an online culture magazine which he founded in 2014. Through The Spinoff, he has developed an innovative media platform that presents engaging multimedia content while also sustaining and supporting New Zealand writers. Duncan has proved to be an entrepreneur and innovator in New Zealand’s online media landscape, achieving success for The Spinoff through establishing a business model of key sponsorship relationships and a customised content creation service for businesses. Duncan has sought to balance the needs of The Spinoff audiences and interests of the writers within the business model, to ensure content is locally produced, topical and relevant, and of a consistently high standard. Through his role as The Spinoff editor he has also made it a priority to support and create opportunities for both emerging and established writers.

Duncan is also an award-winning editor and features writer. Throughout his career as a writer and editor for leading New Zealand publications, Duncan has excelled at telling in-depth stories in compelling and insightful ways. He has extensive magazine, marketing and editorial experience and has written for a wide range of publications including Sunday magazine, Idealog, Sky Sport: The Magazine, Volume, Metro, North and South, The Listener, Faster Louder and The Guardian. Duncan writes on a range of topics, however he has a particular interest in music and sports writing. Before launching The Spinoff Duncan was the editor of the music and pop culture magazine Real Groove for three years from 2006 until 2009, and co-founded and wrote the sports blog Deadball. After finishing at Real Groove, Duncan then moved into a marketing role for Barkers, where he established and launched the bi-annual magazine 1972.

Some of Duncan’s major sports and music articles for Metro magazine have included his story on NZ singer Lorde, the first major feature on the singer, and on golfer Lydia Ko during her amateur days. He also co-authored Dan Carter: My Story, the autobiography of the All Black great, in 2015.

Duncan has won numerous awards for both his sport and arts writing, including the three Canon Media Awards. In 2016 The Spinoff received 11 Canon Awards nominations and won Best Lifestyle/Entertainment Site, while staff writers Alex Casey and Hayden Donnell also picked up wins acknowledging their work for The Spinoff. 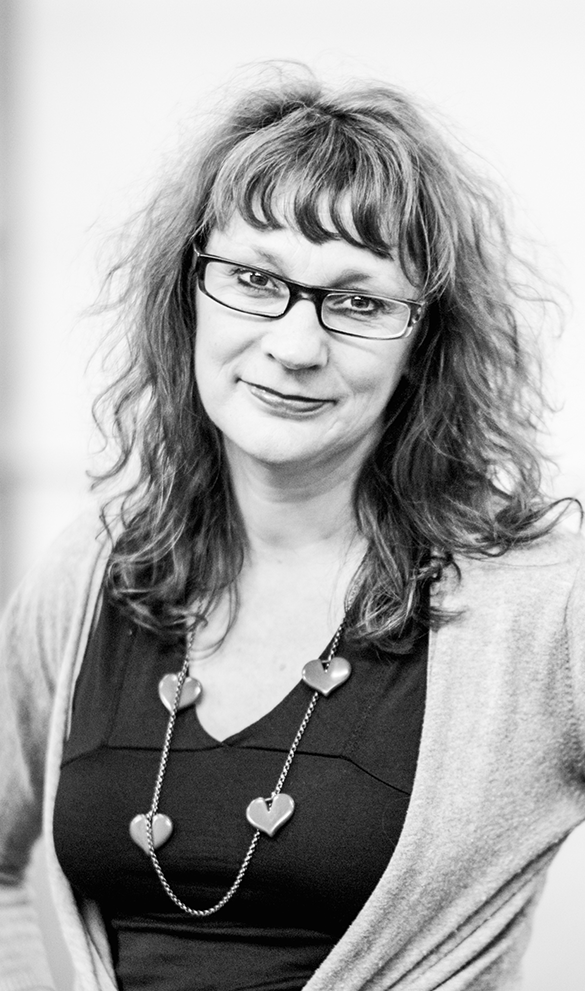 Shona has choreographed many successful works for companies such as Limbs, Douglas Wright Dance Company, and The Royal New Zealand Ballet. She has also created work for theatre, television and film, including sequences for Peter Jackson’s Fellowship of the Ring and King Kong, as well as Auckland Theatre Company’s Equus, Sweet Charity and Cabaret. A filmmaker herself, Shona’s screen works have achieved international recognition and unprecedented sales for New Zealand work featuring dance as a narrative medium. All three of her films have been given international awards.

Consistently pushing the boundaries of the dance medium, Shona has used cutting-edge software and interactive installations in her works. In the 2008 work Mirror Me, she utilised computer generated software to provide an interface between the viewer’s projected/live body. Shona has a strong entrepreneurial drive, actively seeking out new ventures and fields of artistic enquiry to expand her body of work. She is a passionate advocate for dance and performance in New Zealand and is a leader in her field.

Shona also runs a talent agency, the Human Agency, and a production company, The Human Garden. She choreographed the opening ceremony of the 1990 Commonwealth Games, as well as the 2011 Rugby World Cup opening and closing ceremonies. in 2000, she became a Member of the New Zealand Order of Merit for her services to dance and in 2002 she received an Arts Foundation Laureate Award. In 2007 Shona was a participant in the ART venture programme. 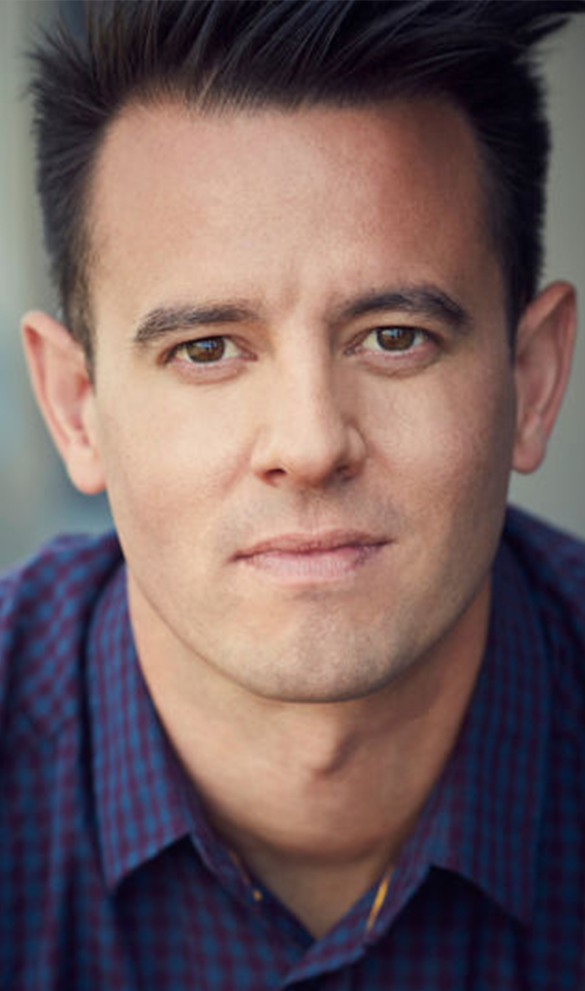 The Hynds Creative Entrepreneur 2013 Award was given to performing arts manager, producer actor and all round impresario Charlie McDermott. The ‘Chief Malarkey’ of The Basement Theatre, Charlie is also a passionate advocate and champion for the creative sector. Read more about Charlie here. View a short video here of Charlie talking about his team and the entrepreneurial activities he is involved in, and here showing Charlie accepting the Hynds Creative Entrepreneur 2013 Award.

2008 has grown into the city’s premier development space for emerging and burgeoning actors, writers and directors. Since 2008 and under his leadership The Basement has rapidly grown from a venue with an uncertain financial position, into a sustainable entertainment business with a large and rapidly growing community of performers, creators, producers, lovers and fans. The Basement’s kaupapa /purpose is summed up in its strapline: A bar. A theatre. A community.

Through Charlie’s vision, drive and sheer hard work, The Basement has become a financially accessible and safe place for adventurous, emerging artists to collaborate, be innovative and experimental, and take risks. In 2012, Charlie lead the strategy development, process and support gathering  which led to The Basement securing Kahikatea funding from Creative New Zealand, allowing it to operate on a cost-share and  risk-share basis with those producing and staging shows at The Basement.

Charlie’s, and co-director Beth Allen’s production company Royale Productions, has produced six plays in two years, with another two currently in development.  Recently, Royale Productions’ experimental immersive theatre experience ‘Apocalypse Z’, produced by Charlie and Beth Allen challenged audiences in Auckland’s Aotea Square and created a new model of theatre that Charlie, Beth and Royale Production collaborators will continue to prototype, refining and recreating with an eye to exporting and licensing shows in other parts of New Zealand and overseas.

Charlie, graduate of UNITEC’s School of Performing and Screen Arts, is a board member of New Zealand Actors Equity, and of the Creative Coalition Auckland. He is a member of the Artistic Board of The Actors Programme, a year-long practice based training course for actors. In 2010 Charlie was a participant in the ART Venture Programme. 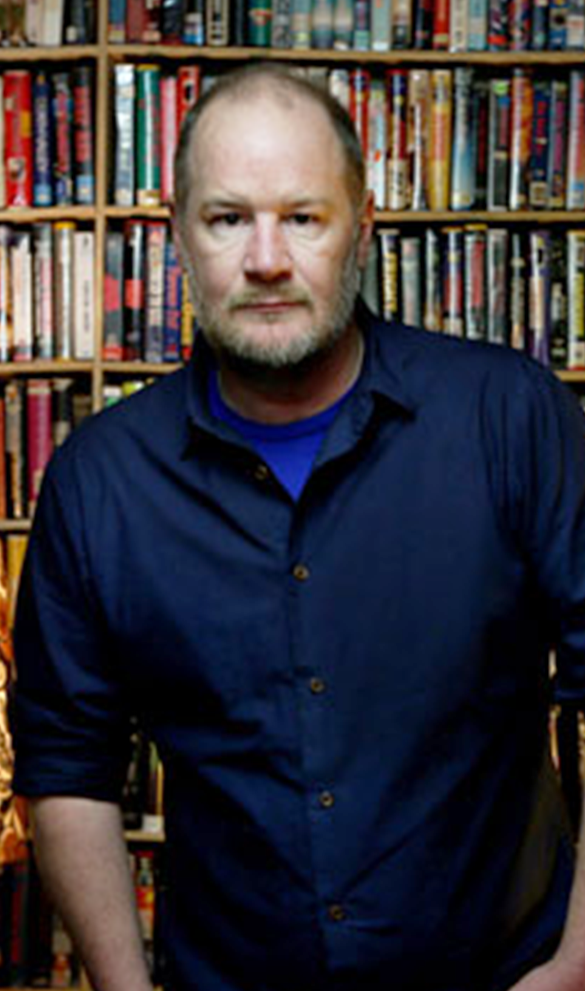 Ant is the founder of the INCREDIBLY STRANGE FILM FESTIVAL, 48HOURS,  2BROTHERS FILMS, SECRET CINEMA, CINEMA CIRCUS. His bio states “Those who know him call him Filmhead (n.) an individual who lives and breathes film 24/7. He has spent every year since 1985 getting kiwis to watch films on the big screen.”

In 1994 Timpson founded the extremely popular and long running Incredibly Strange Film Festival, a collection of eclectic films that travelled the country. It soon became a national institution with an audience of 40,000+ attending yearly. In 2004 it became a fixture within the Auckland & Wellington International Film Festivals and continues to operate annually.

In 2003 his 48HOURS – Furious Filmmaking competition became New Zealand’s premier digital short film event. Attracting hundreds of teams, the films were eventually seen by thousands in cinemas, online and on television to an audience of hundreds of thousands. In 2011 the event attracted 10,000 participants and 200,000 viewers across cinemas, tv, and online.

Also in 2004, Timpson set up The Cinema Circus which is New Zealand’s first fully mobile cinema. Bringing movies to interesting locations all over, he has even screened The Shining at the Shining Hotel, Jaws at Marthas Vineyard, the Oscars to thousands in Aotea Square and many more.

In 2005, Timpson co-founded Headstrong a devolved fund from the New Zealand Film Commission. Its  goal was to support new talent and to produce low budget features. Two films were created, The Devil Dared Me To and The Song of Good. The model he helped build was eventually turned into the new Escalator scheme being run by the NZFC.

In 2008 Timpson was asked to programme a four-month series for the MGM Channel on SKY TV.

In 2011, he also created the Make My Movie initiative.  “Make My Movie is an opportunity for budding directors, scriptwriters and producers to pitch their idea for a film to the public and, if they win enough votes (along with the support of the expert judging panel), they’ll get to make it – with a budget of $100,000.”

In 2012, Ant and his cohort (Austin-based Tim League of Drafthouse Films) are releasing the most ambitious anthology film ever devised with 26 of the worlds best genre directors. The feature film is called The ABCs of Death and it was sold to US based Magnolia Pictures (Melancholia, Albert Nobbs) worldwide as a concept. 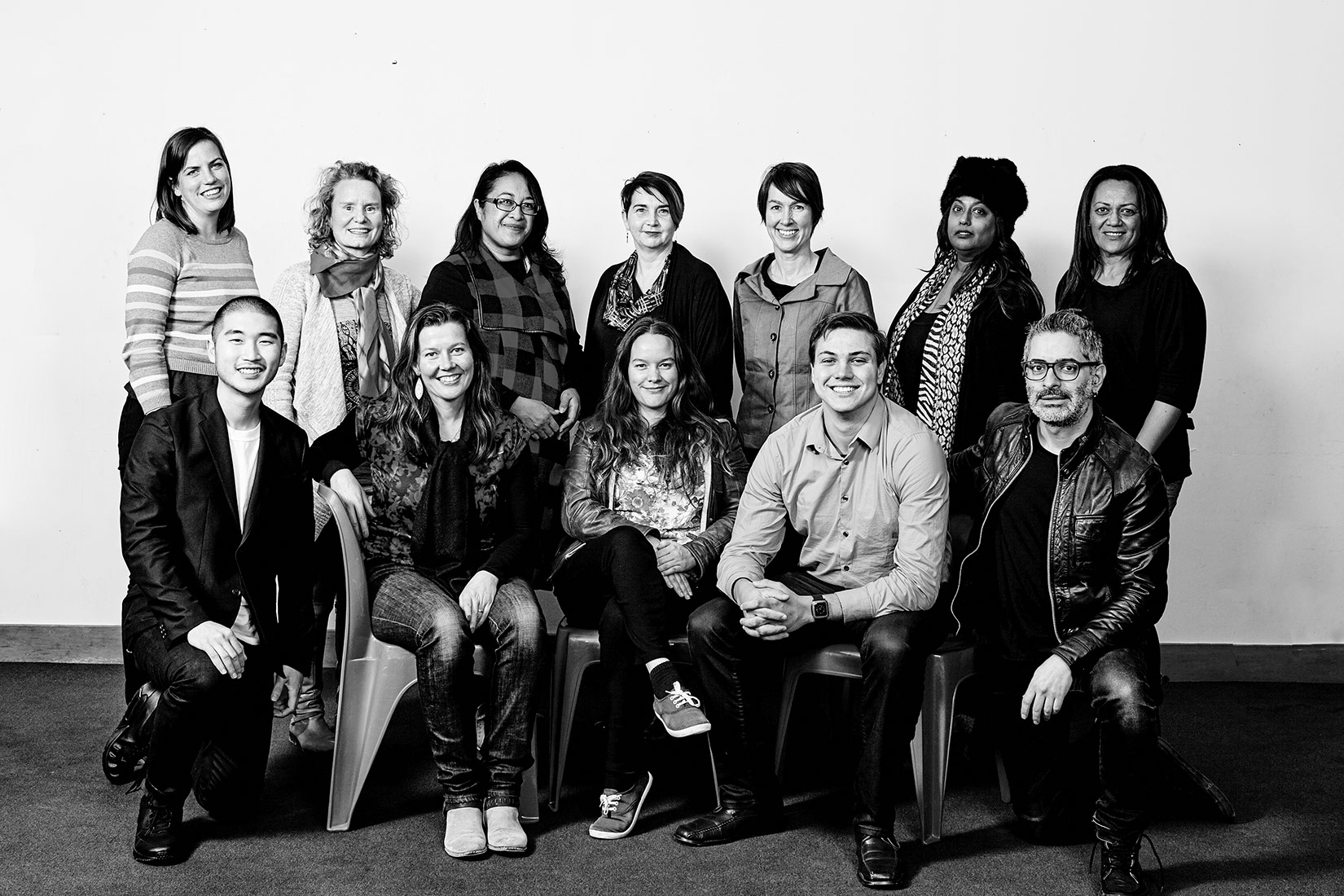 The talent, passion and drive of 12 creative entrepreneurs was recognised and celebrated at the 2016

ART Venture Awards event in Auckland on 31 August 2016. Each was awarded a place worth over

More about the ART Venture 2012 participants and programme here 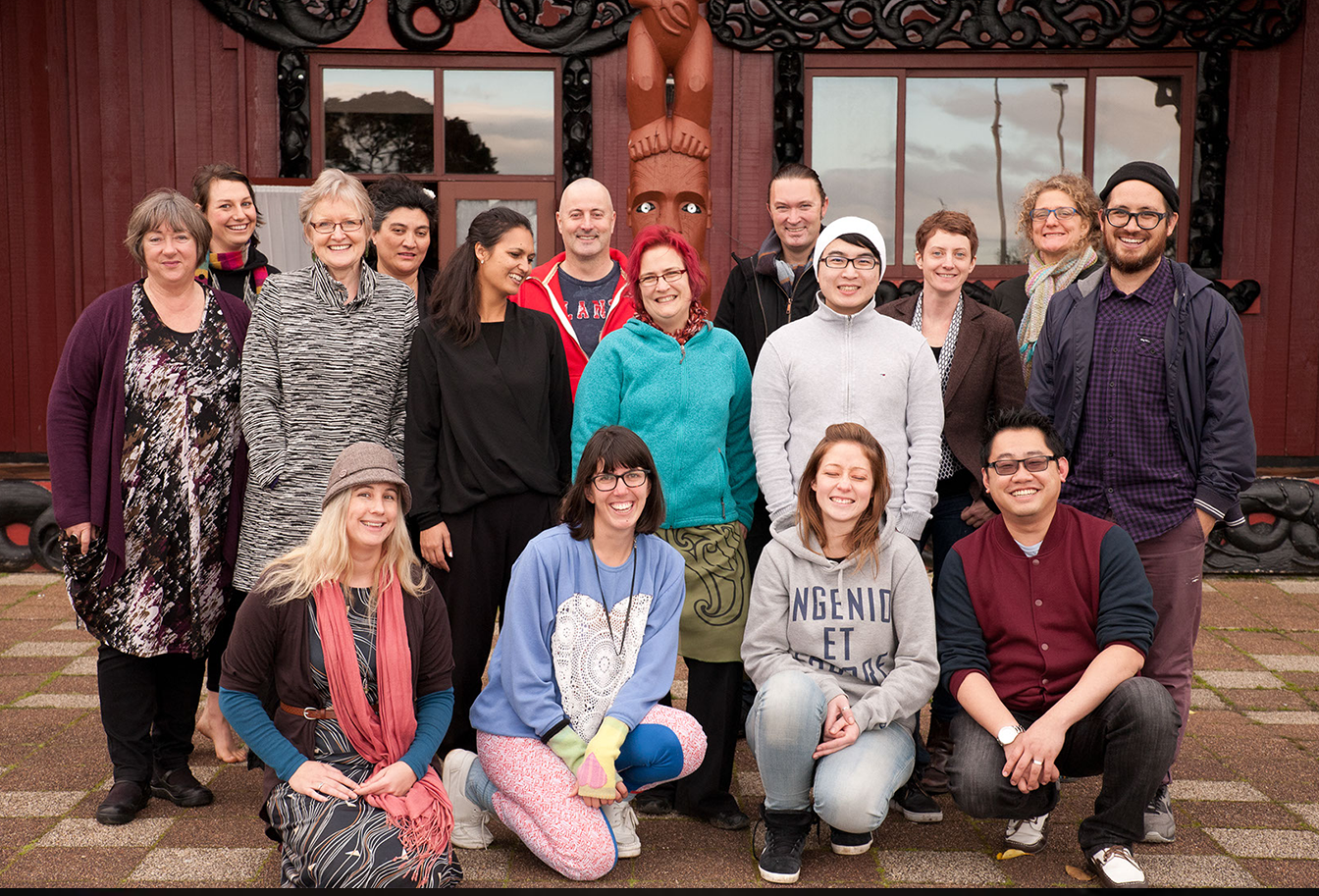 Thirteen awards celebrating and recognising the work of talented and entrepreneurial creative Aucklanders were made at a very special award ceremony held at Auckland’s Q Theatre on the 1st of August 2013.

More about the ART Venture 2012 participants and programme here