This report provides an update on the 2021 report ‘Mapping the Auckland Funding Ecosystem for Ngā Toi – Culture, Creativity and the Arts’.

‘Ngā Toi’ is the term used to encompass culture, creativity and art; and to better reflect the way that art, creativity, language and cultural knowledge are understood as an integrated whole that isn’t always captured by the more Western framing of ‘art’.

The aim of the original research was to map the funding ecosystem for Ngā Toi in the Auckland region, to help build understanding about:

The information in this report provides additional information of funding allocations for the financial year 2020/21. It provides an analysis of the investments provided by key funders of Ngā Toi and where possible a breakdown of investment into the Auckland region.

Analysis is prepared for each of the following funders:

Data was provided by Auckland Council, CNZ and MCH outlining their investment into Ngā Toi. At the time of writing not all funding information was available, and a further iteration of the report is expected to complete funding allocations for 2020/21. It is also important to note that some of the data is based on estimates from the participating organisation, and in some cases, so should be interpreted cautiously.

Auckland Council’s investment into Ngā Toi is provided via Council departments, Local Boards and Council Controlled Organisations (CCOs). Council describes its investments and activities in relation to “arts”, which it defines as “all forms of human creative skill, imagination and interpretive expression, and their various branches including performing arts, visual arts, screen and digital arts, literary arts, and cultural heritage collections”; and “culture”, which it defines as “the values, ideas, customs, attitudes, social behaviours and physical artefacts of a particular people or society, e.g., gaming culture”. These definitions are noted as excluding “sports and recreation, or built and natural heritage” (Auckland Council, 2015, p.6). Data provided by Auckland Council about its investment includes funding for libraries.

Council’s investment into Ngā Toi is guided by Toi Whītiki, the arts and culture strategic action plan, which was developed through research and public and sector consultation. Toi Whītiki was designed in alignment with the Council’s Auckland Plan 2015–2025, Local Board Plans and Māori Plan; and was adopted in 2015. Toi Whītiki identifies the role of the Auckland Council family as supporting arts and culture through:

Data provided by Auckland Council for this research enabled detailed analysis of their investment into Ngā Toi in the Auckland region, by department/CCO and by Toi Whītiki outcome area.

The table below provides a summary of Council and CCO investment which was comprised of:

$149.4m of capital and operational invested through:

$31.7m of operational investment through CCOs:

There are several caveats to note with Auckland Council’s data:

ATEED and RFA merged on 1 December 2020, as a merged entity all future updates are to be recognised as Tātaki Auckland Unlimited.

Similarly – $50.5m capital expenditure by Tātaki Auckland Unlimited can be identified in 2020/21; some of which may benefit Ngā Toi, but this is difficult to quantify exactly and has been excluded from the total.

*Note this figure and information related to the company (ATEED) only

*Note: This Figure relates to charitable trust only.

*figure represents Placemaking investment across the region ($1.346m) as well as key mahi toi works within the Wynyard Quarter ($1.2m)

Figure 1: The diagram below provides a visual summary of Council investments into Ngā Toi in the financial year 2020/21 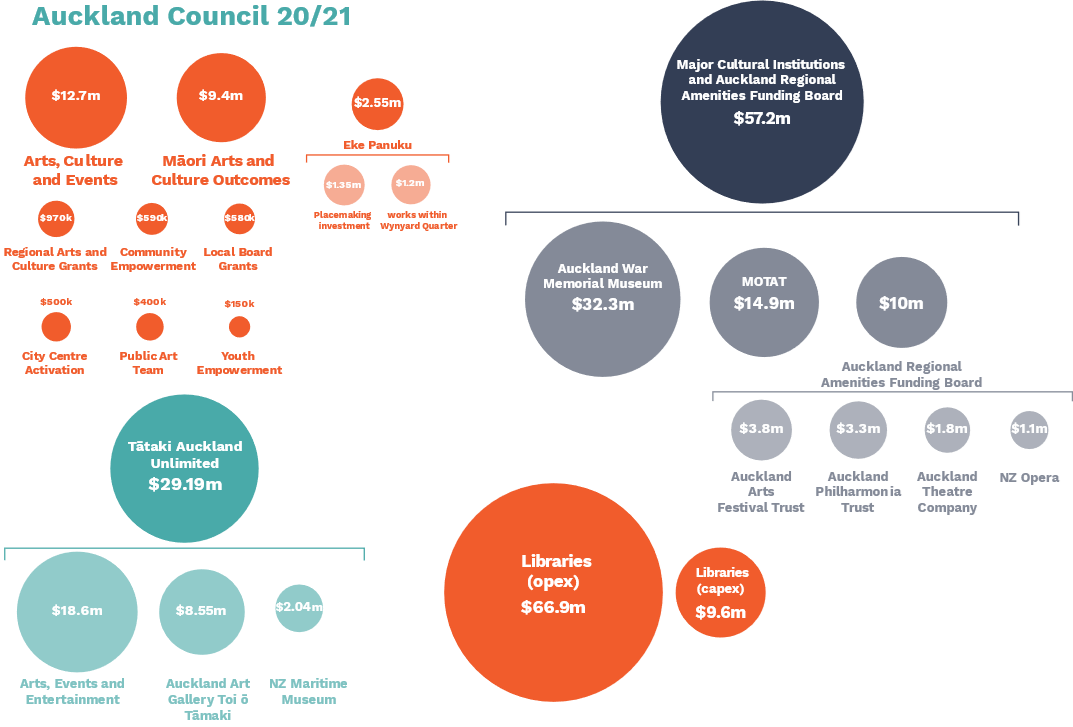 CNZ’s purpose is “to encourage, promote and support the arts in New Zealand for the benefit of all New Zealanders” (CNZ,n.d.); which it does through a set of deliverables, namely developing the arts, advocating for the arts, leadership in the arts and investing in the arts. CNZ’s work also is guided by a number of key strategies and policies – including its Investment Strategy, Te Hā o Ngā Toi Māori Arts Strategy, Pacific Arts Strategy Advocacy Strategy and Diversity in the Arts Policy.

CNZ identifies six strategic outcome areas for its work, including its investment activity:

Greater public engagement with the arts:

CNZ administers a wide range of funds – each with a different focus and scale, and with different eligibility criteria, policies and processes. The majority of funding is distributed through CNZ’s major investment client programmes – Toi Tōtara Haemata and Toi Uru Kahikatea. The two programmes provide multi-year funding (two to six years) to artists, arts practitioners and arts organisations to support continuous programmes of activity and ongoing infrastructure. The focus of these funding programmes is strongly aligned to CNZ’s Investment Strategy Te Ara Whakamua 2018-2023 (CNZ, 2018), which identifies three investment focus areas or features (see table below). Investment clients are further able to access funds and other support focused on capability development and international initiatives.

Data provided by CNZ for this research enabled detailed analysis of funding awarded to initiatives delivered in the Auckland region4, referenced by CNZ funding programme, art form and outcome area.

It should be noted because of the way data was collected it is only an estimation of CNZ’s investment in each programme.

A more detailed breakdown can be found in the tables below:

Support for short-term arts projects, or the stages of a project, that can be delivered within a changed and evolving environment as a result of COVID-19

A contribution toward loss of income for eligible artists and arts practitioners, who may be part of arts organisations (including groups and collectives), who were experiencing devastating loss of income and opportunity and an uncertain future, and who had received the Government’s COVID-19 Wage Subsidy

Supports projects that increase arts attendance and participation by Māori, Pacific and Asian communities in the Auckland Region. It also supports art projects for, by and with artists from those communities

Selected arts organisations can apply for funding towards the salary costs of a fundraising staff placement. Support for organisations based in the Auckland region and Northland is through a partnership between Creative New Zealand and Foundation North

Other Programmes
(funding programmes with under $100k p.a. distribution) (2)

Figure 2: The diagram below provides a visual summary of CNZ investment in the financial year 2020/21 and breakdown of how funding was distributed in Auckland by funding programme. Some programmes have been clustered – particularly the investment client programmes and other smaller funds where the total distributed each year is under $100,000. 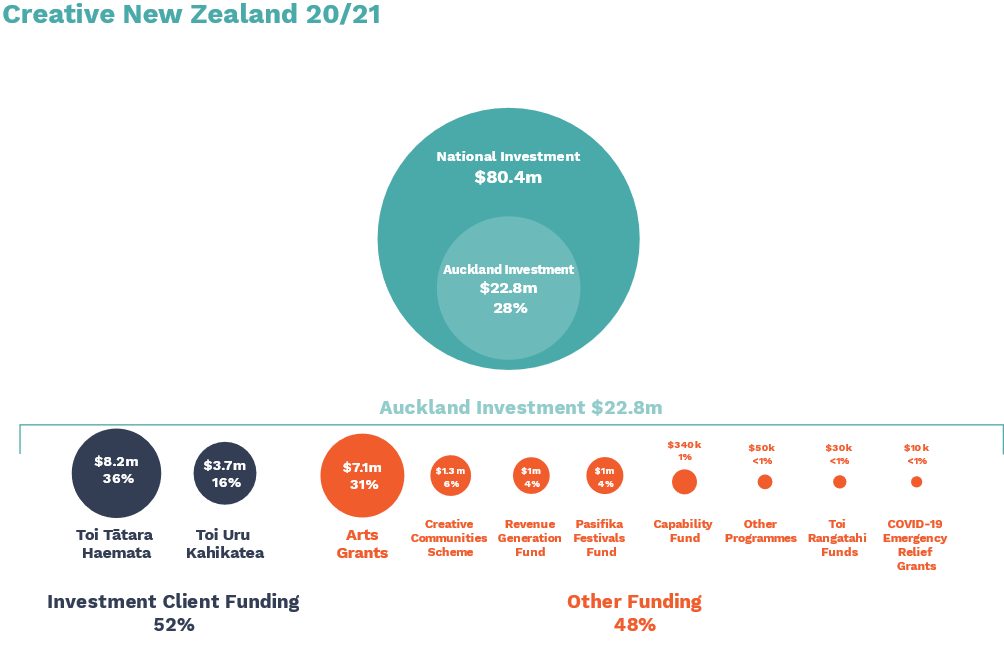 Note: This figure does not include the number of grants made through the Creative Communities Scheme

Figure 3: The diagram below provides a visual summary of changes in CNZ funding overall and Auckland programme funding in the financial year 2018/19, 2019/20 and 2020/21. 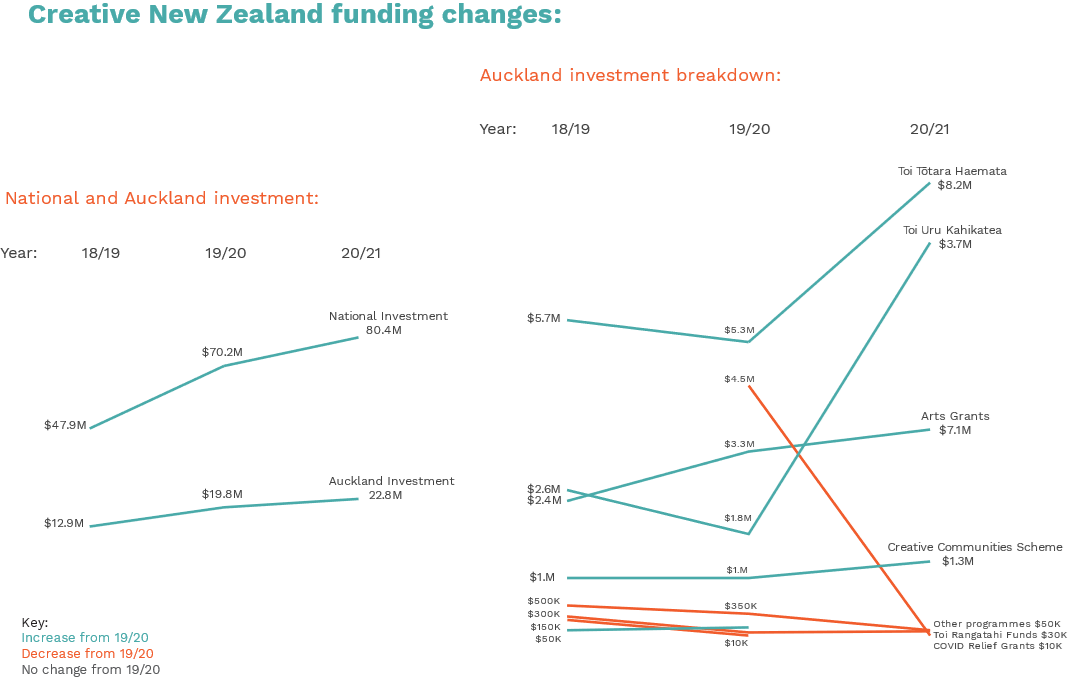 Announced in May 2020, the Regeneration Fund comprises three cross-sector initiatives with a longer-term focus:

Collectively, these three initiatives had a total value of $150 million over three years in support for the cultural sector to create new employment and skill development opportunities, promote innovation and enhance New Zealanders access to inspiring cultural experiences.

An additional $121 million will be provided through Manatū Taonga in financial years beyond 2020/21 to support the sector through the impacts of Omicron.

No funding was awarded from the Cultural Sector Innovation Fund in the period, funding from this Fund will be included in the 2021/22 report.

At the time of writing there was no available data for funding allocations to crown entities and minor grant funding programmes for the financial year 2020/21 for the Auckland region. Because of the limited information no diagrammatic representation of funding has been made.